Each year the ICO conducts an awards program to recognize orchestras, conductors, and volunteers that have demonstrated exceptional achievement. These highly sought-after awards provide local and statewide recognition to both individuals and their organizations. An independent panel of judges reviews materials in March, and awards are announced in late March. Members of the ICO Board of Directors will make a formal presentation during the spring, upon request, to each of the award-winning orchestras at a concert or other special occasion.

Especially this year, ICO will be taking into account all of the virtual achievements that were made by our members, in addition to any in person events that were able to take place.

Only current ICO member orchestras are eligible for these prestigious annual awards.

2022 Awards Brochure: This brochure contains information regarding the application process and the requirements for applying for an award.

Awards Application: Applications for the 2022 Awards will open in November 2021

All applicants must be current members of the Illinois Council of Orchestras.

After having received an award, an organization will not be considered for an award in the same category for a period of five years. The organization may apply in other categories.

A community orchestra is one in which at least 60% of the musicians are either volunteers or are paid less than union scale.

A college/university orchestra is one in which at least 75% of the musicians are registered students.

If requested, one on-site presentation will be made at a performance by winning orchestras between March and July 2022, by a member of the Board of the ICO.

The Illinois Council of Orchestras reserves the right not to name a winner in every category.

THE ILLINOIS COUNCIL OF ORCHESTRAS AWARDS FOR 2020 WILL BE CONFERRED IN THE FOLLOWING CATEGORIES:

The Illinois Council of Orchestras is pleased to announce the 2021 recipients of its annual awards for excellence in the field of music performance and for support of musical organizations. An awards panel that included judges from the Illinois Council of Orchestras Board of Directors and from independent arts organizations reviewed nominations representing orchestras, youth orchestras, and chamber ensembles from throughout Illinois.

2021 Award presentations are being presented virtually for the forseeable future.

The Illinois Council of Orchestras was founded in 1974 with a mission:

Presentation of the ICO Awards will take place at local concerts and other events of the winning orchestras. The timing for this year's awards will be determined at a future date, due to the COVID-19 outbreak.

Professional Orchestra of the Year

Community Orchestra of the Year 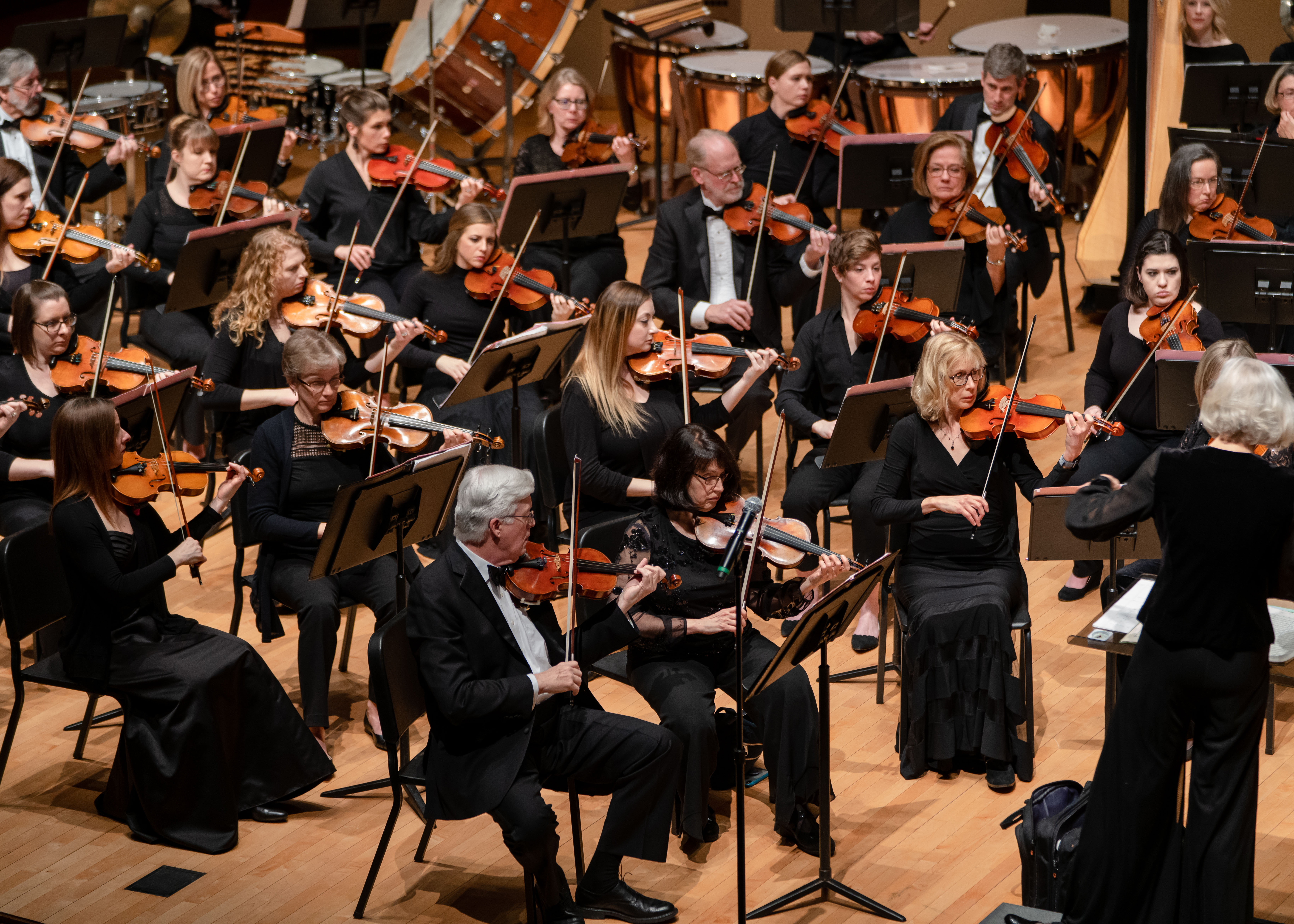 As a highly accomplished, all-volunteer, community orchestra, the DuPage Symphony Orchestra works to inspire people of all ages to develop an appreciation of symphonic music; to provide accessible, real-life orchestral experiences for area children and students; and to create an outlet for talented musicians to share their passion for music throughout DuPage County.

During our 66th season of 2019-2020, audiences embarked on a Musical Journey of international discovery consisting of nine exciting concerts, performed with artistry and enthusiasm, and featuring guest artists at each of our five subscription concerts. New this season, we partnered with area businesses and non-profit organizations to provide a range of cultural and educational activities in the lobby of Wentz Concert Hall to enrich and enhance our patrons’ musical experiences. This included poster displays designed to add cultural context and preview the entire Musical Journey season, a photobooth with themed props so attendees could share their excitement with photos on social media and enter to win prizes, a Musical Passport program designed to engage audiences, and a new website feature – Newcomers Notes – so new patrons unfamiliar with classical music could learn more in advance of the concert.

Youth Orchestra of the Year

Conductor of the Year, Professional Orchestra 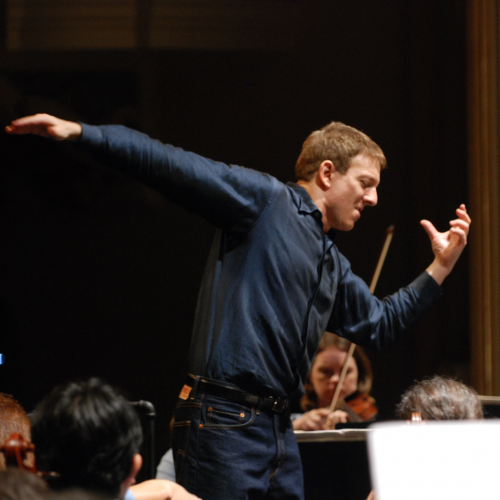 Scott Speck has been a regular commentator on National Public Radio, the BBC, the Australian Broadcasting Corporation, and Voice of Russia, broadcast throughout the world. He has been featured in TED talks and at the Aspen Ideas Festival. His writing has been featured in numerous magazines and journals.

“Scott Speck is as energetic as he is talented, with a charismatic personality that leaps over the footlights.” - The Baltimore Sun

Conductor of the Year, Community Orchestra

Matsunaga came to the U.S. in 1998 to pursue his violin studies with David Taylor, Joseph Golan and Robert Chen while attending Roosevelt University and Northeastern Illinois University, where he received his master’s degree in music.

From 1999-2001, Matsunaga was a regular member of the Civic Orchestra of Chicago, a training orchestra of the Chicago Symphony Orchestra. In March 2000, he performed at Carnegie Hall under the baton of Maestro Daniel Barenboim. While playing in the Civic Orchestra, Matsunaga has played with world-renowned conductors including Neeme Jarvi, Christoph Eschenbach, Osmo Vanska, Pierre Boulez and Pinchas Zukerman, to name just a few.

As a conductor, Matsunaga made his debut at Carnegie Hall in New York in 2018 with the Midwest Philharmonic Orchestra. He has conducted in Vienna, Salzburg, Detroit and at Orchestra Hall at Symphony Center in Chicago.

He lives with his oboist wife, Naomi, and three little children, Edward, Cecile and Felix.

Conductor of the Year, College/University Orchestra 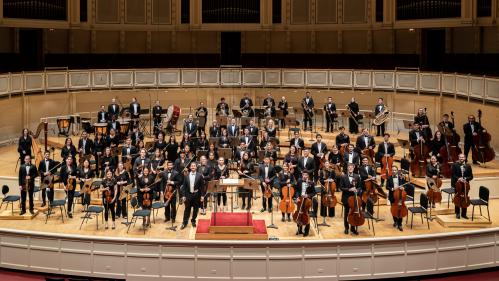 Educated in Rome’s rich conservatory tradition as a conductor, composer, and pianist, Maestro Emanuele Andrizzi, whose conducting has been praised as “admirable” by the Chicago Tribune and full of “spirit and thoughtfulness” by the San Diego Union Tribune, is a versatile musician with vast experience in the symphonic, operatic, choral, and ballet repertoires and a passion for the broad spectrum of musical arts. As a conductor, he has collaborated with symphonic and operatic companies including the Lyric Opera of Chicago, San Diego Opera, Chicago Philharmonic, Opera Theater of St. Louis, Chicago Opera Theater, and New Philharmonic.

In 2018, he brought his expertise in Italian opera to a team of international artists who joined together to fill a void within Chicago's current operatic climate, and created the Opera Festival of Chicago (OFC). The OFC, of which Maestro Andrizzi was appointed Music Director, will amalgamate the atmosphere and artistry of the operatic festivals of Spoleto, Pesaro, Verona, and Festival Puccini, and aspires to become America's go-to hub for world-class Italian opera performances.

Mo. Andrizzi is a dedicated and enthusiastic educator. He has worked since 2013 as the Principal Conductor and Head of the Orchestral Program at the Chicago College of Performing Arts at Roosevelt University, and as the Music Director of the McHenry County Youth Orchestras. His work with young musicians has extended to collaborations with international artist programs, including the Ryan Opera Center, the Mediterranean Opera Studio and Festival, and the Chicago Opera Theater Young Artist Program. In addition, he has guest conducted in various university music programs, including the Jacobs School of Music at Indiana University, the Bienen School of Music at Northwestern University, and DePaul University. Mo. Andrizzi has conducted many All-State, Honors, and Youth Orchestras, sharing his passion for the musical arts with young musicians from around the country.

Executive Director/General Manager of the Year

Programming of the Year 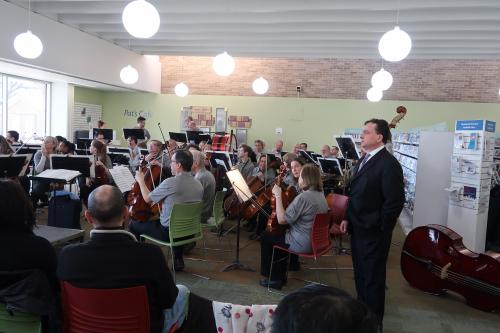 The Waukegan Symphony Orchestra was born when the comedian Jack Benny returned to his hometown of Waukegan to star in the Symphony's initial performance on April 24, 1974. The Symphony has since made itself synonymous with the broad range of culture that is the hallmark of our city, engaging its audiences in both traditional and more unusual musical works.

Besides programmed concerts, the Symphony has two special traditional performances. A Do-It-Yourself Messiah in honor and memory of a longtime supporter and board member, Joseph Favero. In 2019, the Symphony performed Mozart’s arrangement of Handel’s Messiah. The second traditional performance is a Young People’s concert, designed to introduce the younger family members to the orchestra. After the concert, there is a meet and greet on stage with the instruments and players.

Through the assistance of the Illinois Arts Council, the Waukegan Park District, the Waukegan Public Schools, and the Waukegan Band Foundation; the Symphony enriches the lives of numerous community members including many who otherwise could not enjoy the benefits of performances.

For musicians, it offers an opportunity to perform in an enriching musical environment. For community players and students, it offers the opportunity to work with professional directors and musicians to present a high-quality performance that are diverse, challenging, and entertaining.

Community Relations of the Year 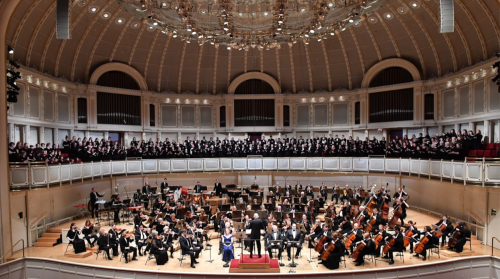 The Symphony of Oak Park & River Forest, one of the oldest community orchestras in the country, was founded 89 years ago in October of 1931, by Oak Parker Gladys Welge.  Ms. Welge was the assistant conductor of the Women's Symphony Orchestra of Chicago at a time when women were not even allowed to play in symphony orchestras.  The S/OP&RF orchestra has given concerts continuously, with no break since our founding, surviving upheavals such as the Great Depression, World War II, and we are working very hard to survive the current pandemic.

Our conductors through history:

In 2012, our Associate Conductor, Maurice Boyer, joined our musical family and has been a wonderful addition!

The orchestra has benefited greatly from the professional collaboration and personal friendship of Jay Friedman and Riccardo Muti, the eminent music director of the CSO. On November 10, 2019, he worked with us for the 7th time! Maestro Muti also attended our 2015 performance of BEETHOVEN Symphony No. 9 and was favorably impressed by the concert.

The S/OP&RF believes in providing young people with the opportunity to participate in the performance of live music. We continue to award young string interns with a cash stipend and hold an annual Youth Concerto Competition. We work to provide private lessons and instruments for lower income students a well as tickets for their families to attend our concerts. As always, we serve all youth by offering free admission to all students through college to our River Forest concerts.

We are thankful to the ICO for this recognition!

Volunteer of the Year

Marjorie Stinespring
Music of the Baroque

Honorable Mention, Volunteer of the Year 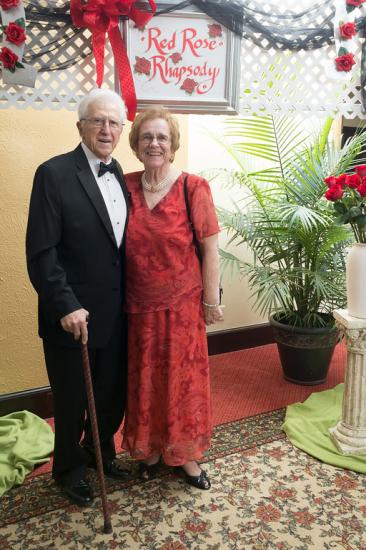 For 2019-2020, Mary was actively involved with all the major fundraising efforts of the Friends of the Illinois Philharmonic Orchestra including the Fall Fashion Show, the Annual Holiday Party, the Rising Stars Concert, and the Musicians Dinner where she helped prepare and serve a meal for over 100 Illinois Philharmonic Orchestra musicians and their guests.  She was thus instrumental in helping the Friends raise a contribution of $25,000 for the IPO in fiscal year 2020.  For all these contributions, we believe that Mary Moutvic should be the Volunteer of the Year for 2019-2020.

Not a member? Join today!

Joining the ICO is as easy as the click of a button. Visit our Membership page at ilcouncilorchestras.org to learn more!